Seven sections,walking the Western way in the West of Ireland, including the Bangor trail

The Western Way -Bealach an Iarthair- is a long-distance walking trail taking in spectacular scenery in the counties of Galway and Mayo in the west of Ireland.
In 1994, a short preparation at home gave us the idea that the Western way was completely marked. Being there: it was not*. (nowadays it should be better, we have read). But, nevertheless, the Western-way is and was a special adventure!

* 2019: We advise you to use the official website of the Western way when preparing your trip.
The official route is different from the one we have followed.

Getting there: We had a flight to Dublin, from Dublin-airport by bus to the bus station in Dublin city, a bus to Galway (4 hours) and a little local bus to Glann (Oughterard). You also can book a flight to Shannon.
Accommodation: The famous B&B system was - as always - perfect. And a youth hostel in Newport.
The maps: the Ordnance Survey of Ireland 1:50.000, nrs.37,38,44,45 en 31 and a compass!

Easter 1994: a large part of the Western way, on foot, of course, and sometimes a local bus.

Height on trail: from sea level till about 400m
Distances between the stage cities: 24 - 32km

And from Balina the direct-bus to Dublin. 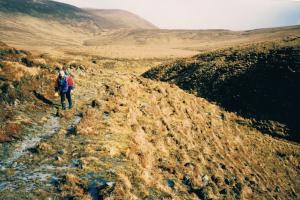 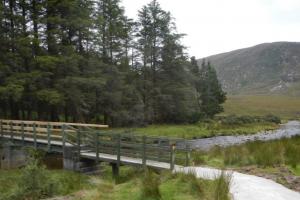 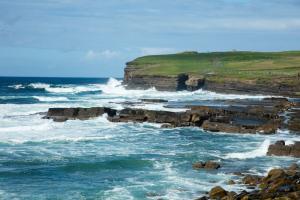 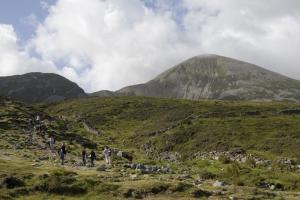 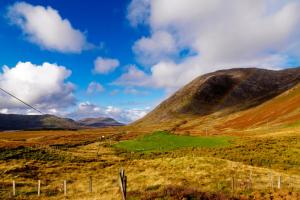 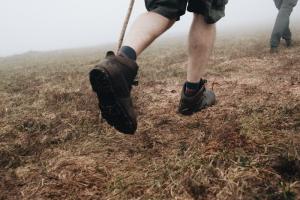 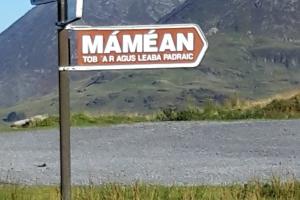 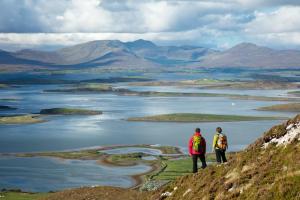 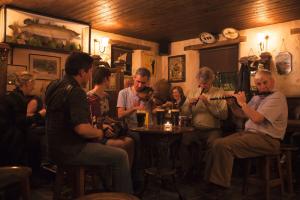 On trail: a 200km long marked hiking trail through the spectacular landscapes of the counties of Galway and Mayo and finally ends at the border with the county of Sligo. In the distant, deserted and forgotten northwest of Ireland. The whole route can be walked in 12-13 stages. The route has no significant climbs. The total ascent along the way is 1700m. The route follows old forest paths, heather paths, postal roads, "green roads", no paths and occasional stretches of asphalt. In some places there are platforms, but you have to take into account some rather wet tracks. Then the water is everywhere. Especially after showers. You try to "jump" from pollet to pollet for a few more kilometres, but once you've seen the absurdity of it, it's just going without stopping.

All-important theme of this hike: you're on your own now! The reason that the Western Way is at our top. After all, you don't have the experience every day that you don't meet a single person in the outside world between half past eight in the morning and half past nine in the afternoon. On such a day, you take, so to speak, a short break from civilization. This gives you all the space you need to take in the fascinating wilderness. To discover how many shades of brown there are in a moorland. What sun and wind "does" with peat bogs and hilltops. And what a vast uninhabited and unspoilt landscape with the Nephin Beg mountains in the background does to you. And how relaxing a continuous pattern of fierce pounding waves from the North Atlantic can be on the steep rocks of Downpatrick Head.

Of course there are also more inhabited parts during the route. If only to find a B&B for the night. In the villages. For example. And there is the beautiful stage around the northern slopes of the Maumturk Mountains and then via an old stagecoach road with some farms to reach Leenaun. The hiker will also visit Westport, a town with almost 6000 inhabitants. Or 8km walk on the N59 which reminds you of the Dutch hustle and bustle. But what you remember, even after years, is the dominant feeling of the unspoilt and "wild beauty", as Oscar Wilde described it.

From a sparsely populated area to a region with thriving cultural traditions is a small step here. Large parts of the hiking area belong to the Gaeltacht, areas where the Irish language is the vernacular. Or where you can still hear the original Irish folk music in a pub. Or - and it doesn't take much - where you're invited to sing a song and then be treated to an extensive Irish folk song, smeared and enthused by the fa. Guinness. Or stronger. To conclude at closing time that, when it comes to singing, we are still miles behind the Irish when it comes to singing.

This is also the area that experienced the greatest depopulation during the Great Famine of 1845-1850. Numerous memories of that time can be found during the trip. The National Famine Memorial by John Behan, a "coffin ship" with skeleton bodies and commemorates the anniversary of the Famine, for example, at the foot of the Croagh Patrick (750m), a sacred mountain for the Irish, also a place of pilgrimage. You can take a day off to make the climb. And back again.

The following applies to the entire route: prepare yourself well. Good closed walking shoes, rain gear, food and drink and inform your arrival address about the expected time of arrival at the time of departure. Not everywhere is mobile range.

Below a great film about a stretch of the Western way and the ascent of two mountains in this area. Made by Gerry McVeigh. McVeigh gives a very good impression of this deserted area, without having to be in the picture all the time. It's about the area, not about the editor! Homage!