Five sections of the Via de la Plata, the Camino

Getting there: a flight to Madrid and from the airport ( Madrid Barajas) by regular bus to Salamanca, where we started our walk. About 2 hours by bus.
Accommodation: We made use of the services of Pelgrimroutes.nl: regional hotels in the stage cities along the trail. And luggage transfers. Also the transfer back to Salamanca.
Indication of height: slight differences in height.
Maps: the trail is perfectly signposted. Yellow arrows, granit blocks with informations, local creations.....
Or you buy a guidebook, such as: walking guide to the Via de la Plata and the camino Sanabres: from Seville to Santiago and Astorga, Mr.G.Kelly.
The trail
The Via de la Plata - the Silvertrail, although the route has nothing to do with silver - is a more than 1000 km long pilgrimage route that starts in Seville and - where else - ends in Santiago de Compostela.The route largely runs along and over an originally Roman road from the south to the northwest of Spain.
If you walk all the way along the route, you will visit the following impressive old cities: Seville, Mérida, Trujillo, Salamanca, Zamora and finally Santiago de Compostela.
Salamanca, a student town, has a beautiful central square: the Plazo Mayor, the heart of the historic centre, with its baroque decorations on and around the sandstone constructions. It is an arcaded Baroque square that is generally considered to be the most beautiful in Spain. Until far into the 19th century, the square was used as an arena.
We were there in the Holy Week,the week before Easter. Semana Santa. In which there are processions in almost all of Spain. Among others in Salamanca. With lots of incense, music, drums, bells, passion scenes, image groups, full of emotions .......... a real spectacle that you must have seen once.
The contrast with the atmosphere of the first days of walking can hardly be greater.Unless the endless plateau, the Meseta, with an altitude of 800 - 1000 m., awakens all kinds of things to you.
Because that's where this route mainly goes: farmlands, bare plains, fields and (grain) fields with - sometimes muddy - wide red paths, red earth, tractor tracks, along the "necessary" asphalt, vastness, endless horizons and drought..............Summer can be very hot here! Spring and autumn are considered the best times to walk because the weather is usually not too hot, or too cold.
The Meseta is often kept alive by irrigation machines.
Close to Cubo del Vino, the first vineyards come into view. This region south of the Rio Douro is known for its excellent wines.
The further north you go, the greener the surroundings and the more likely you are to get some shade. 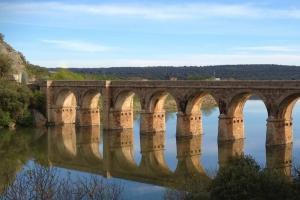 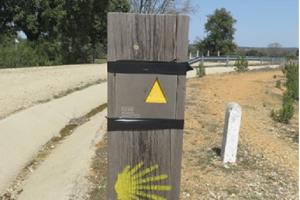 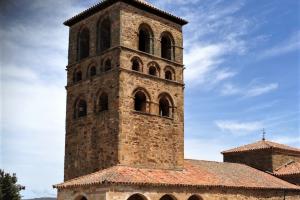 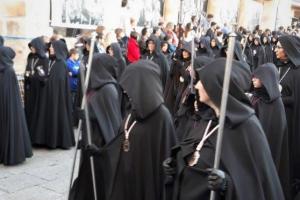 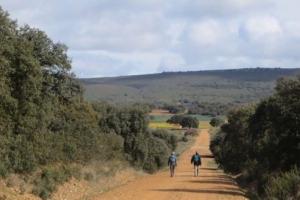 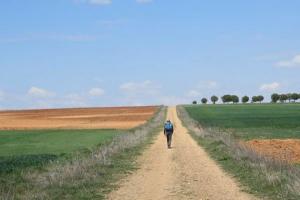 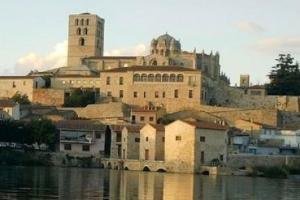 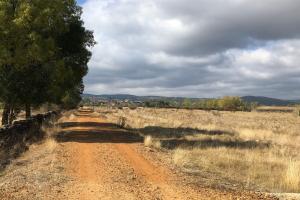 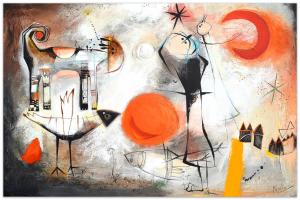 On the way: pilgrims used to walk, say in the Middle Ages, not for fun. Reasons for a pilgrimage were rather devotion, forgiveness of sins, obtaining indulgences, keeping a promise, penance, pure inspiration, wanting to visit a sanctuary, out of thanksgiving, deepening, contemplation and reflection.....................and then the route to be walked was mainly determined by "the shortest way". Rather than by beautiful nature, impressive views, special rock formations or special vegetation. The latter is important when making our choice for a route to walk. And then you walk this route through the endless plains, the distant horizons and the "monotony" of the landscape with with ever more question marks. But that's the beginning of a reflection....

If you have the time to do so, check out the beautiful old town of Zamora, Castile Leon and its surroundings.
Day 2 or 3. Once with the status of a kingdom. And also centuries of battleground between Christians and Turks (8th - 11th centuries). It can be reached via an old arched bridge with 16 beautiful arches....

Day 4: the ruins of the imposing castle of the Knights of the Order of Santiago who guarded the transition from the Rio Elsa in ancient times.

Below a video about the section Salamanca - Zamora: